This is part of my discussion with retailers and new Hyv cubers (game devs, filmmakers, journalists, musicians, authors, web devs etc.) who are incorporating and overlapping their stories and productions with each others, ours, and mine via storyline and horcrux/portkeys).

When we use the term storycube it is an evolution of storyline.  It is not only a linear structural map for architecting a story but an inherent reminder that it is not only long and thick but tall and dense.

The term Storyworld is one of the imagination.  A structure that exists within a narrative and gives no architecture or formation / direction in pre, principal or post-production.  Storyworld is like saying I have an idea in my head for a house.  A Storycube is the actual way and dimensions that you build it.

Filmmakers and writers have always worked with storyworlds but that was not how they wrote or produced an artifact, message or experience.  We do not create storyworlds we carve from them and explore them further when need be… but to do that we have traditionally carved out the storyline.  When we have asked, or let, others expand the creation of that ‘storyworld’ we only are able to hand that to them via a ‘storyline’ and the elements that can be extracted from it.

We are not in the realm of creating storyworlds… but limiting/carving from them a piece of architecture.  This paradigm shift in entertainment, storytelling, interface, industry and communication is not in our ability to change the shape of the storyworld that has always existed… but the architecture we bring back from those worlds to give an audience or other creators a portal into them.  The screen has become dimensional and both fluid and dense.  It is segmentable, collectible and mobile.  It is soon to be ubiquitous and personable/izable.  It will be reactive.  But all of this starts with the plan and designs of the artifact/portal.

What was a flat two dimensional screen now, like any reality has cubic, density, fairly untamed ability for unrestricted flow and time to it’s linear flat surface.

It is not a world we create but a cubic tank of substance and flow that teaches and fills an audience member and collective with the senses, 4th walls, and suspension of disbelief for them to travel immersively into a storyworld that has always existed beyond that dark wall at the other side of our imaginations.

& as a side note – Although PURPOSEFUL transition between platforms can add to a purposeful instigation of action or sense for the audience…  It is not the media in separate platforms we jump between (transmedia) but the overlapping of those platforms into one central immersive portal …or portkey… that is inherently the new story structure.  The future is about removing all but purposeful transition unless you are using it as a remote “horcrux” or entrance (portkey that carries the soul of the story in the real world) into the storycube…..  Transmedia for that reason is inherently a precursor to the storycube and with ancillary platform builds ..you are most likely growing limbs to attract audiences back to the core. … and inherently for those reasons, subject to being predominantly marketing goal driven.  Which is the actual thing we build to show people / bring people into the storyworld.  Storycubes are simpler and smoother we are discovering when they are created at inception, not after  or from a follow-up extension design.

Storyworlds are much easier to discover than building a storycube.  A storycube has to be built within and with a common communication/sense lexicon.  Storyworlds are just marching through your imagination with, most likely, having no communication at inception besides within yourself.  Which goes back to Aristotle … truth is found through the dialectic.  Through building understanding in a channel of a common lexicon to find the truth of & in the singular narrative.  Storyworlds do not need to exist outside your individual understanding and consumption.

This is all part of the discussion we have with all the cubers at the Hyv. 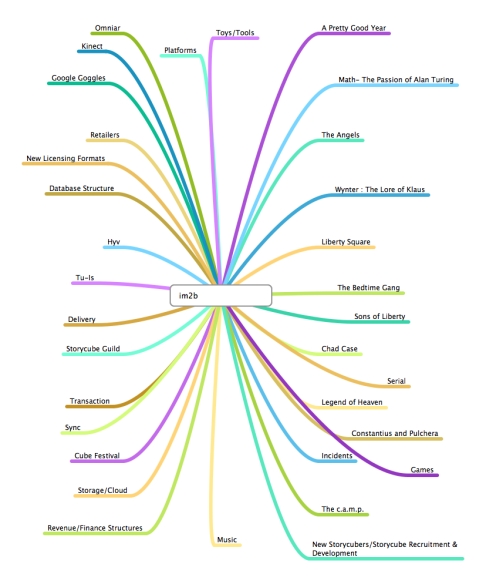 Playing with Hyv/Tu-Is layers (hypervideo/audio portkeys& horcruxes.) this is a cool one in transparent AR – (geolocational ) used in several projects in differing formats/edits.. But all connected. Incidents/LOH/RUCC.c.a.m.p./Children of Convergence /(Wynter)… – Goldilocks.p

Sync, emotion, flow, AR=hypervideo, the ‘falling’ into 4 out of 5 rabbit hole/portkey/horcrux wormholes & stepping/action purposefully for the 5th, action via reaction, 2nd screen layback and storage.. HTML5, WebGL, CSS, the bandwidth and processing issues of each… ..And ‘clocks’ ..lots of simultaneous, varying ‘clocks’…this is what my left brain has been filled with for the past 5 years. & why a stroke is probably on the horizon.

Anyone who thinks Yahoo should be focused on being a product/tool company that competes on text search, mail with Google or competes with Facebook on social list sites .. Or competes with Twitter on social text messaging… And not a product company for the convergence of media (and audience and retail) …has lived in Silicon Valley to long … Or lives solely in the world of keyboards and screens. (& no, humans are not going to stay attached ubiquitously to keyboards & screens past this paradigm shift.) People should not confuse keyboards,text, and screens with “the web”.

‘Experts’ preaching stories aren’t 1000% better/more immersive with singular patterned focus & flow, or how non-purposeful transition & disruption doesn’t hurt flow= simply way off.   Not talking about purposeful disruption/transition between platform… but the choice of disruption/platform architecture has as much to do with how the channel effects message ..thus is the message as the words, acting, cinematography, audio, emotion etc.  Disruption if it is chosen should enhance 4th wall when possible. Not degrade it (which is what changing platform does 99% of the time).  Pick and design platform transition as if you were writing, performing, directing a scene.  The new storycube (vs. storyline) architecture of media needs to be designed as if audience were actors… movement or disruption needs to be designed for action via reaction.

A book, a series, etc.  are designed that chapters may be self contained but it is the same platform architecture when you return.  Now we have platform architecture changing between and within chapters… the story architecture and flow is more important than it ever was to hold the story between the transitions.  The real world activity and action of the audience has to be built into the ethos, pathos and logos of the script and production…

The Happy Days settlement is a warning flare for every producer, filmmaker, company, Internet platform, ‘give-away’ for free, open sharing advocate who ignores complications of front end contracts during production… That the hornet’s nest of law suits coming regarding all profit from ‘Internet/ancillary’ may be disastrous because of people being called ‘experts’ who have never negotiated a long term back end collaborative production that made significant profit.

…a whole new story and production architecture which needs all new production systems that converge several different disciplines… ..which maybe 7 people on the planet have the knowledge base to do, never mind entertain and organic emotional flow/draw. ; ) …it’s not about multi-platforms, it’s about one universally converged platform. & It’s what Hyv,Tu-Is, and the Storycube were created, over the last 10 years, for. http://bits.blogs.nytimes.com/2012/07/01/google’s-project-glass-lets-technology-slip-into-the-background/